Previously on ugh blog dot jpg etc, I went on for 1000 words about dedicated ports. The tl;dr is that dedicated ports have got RFCs associated with them about what you, the savvy internet user, can expect to find should you connect to them.

I talked specifically about the internet’s favorite child, Port 80, but now it’s time to talk about three more: Ports 7, 13, and 17. They each have protocols with rules about what they’re to be used for, and that’s what this blog post is about. I have no idea if anyone is still using these protocols for, like, real reasons, or if they ever were, outside of testing, but I decided to implement them anyway, mostly just to see if I could. Turns out it’s really easy. We’ll start where I started on this adventure, with Port 17.

Quote of the Day

The internet’s beginnings were apparently a place of whimsy and, well, arbitrariness because Port 17, one of 1024 dedicated ports the Internet Assigned Numbers Authority has set aside for Official Use, is devoted exclusively to serving up a quote a day to anyone interested. You can read all about it in RFC 865, dated May 19831. In fact, all three of the protocols I’ll talk about today were published then. For reference, here’s what I was doing that spring: 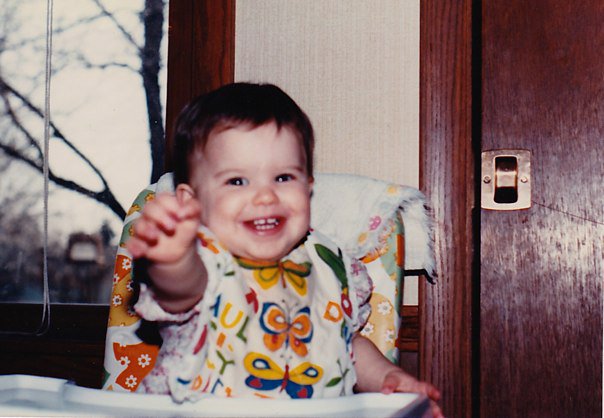 I still have basically the same haircut. Anyways.

The protocol itself is really short – a scarce 216 words – but here’s an excerpt:

This was too good an opportunity to pass up, so I built my own. Conveniently, I’ve been clicking ‘like’ on pithy book and author quotes on Goodreads for years, and huzzah for me, they offer a CSV of my favorite quotes, which I downloaded and parsed for this purpose (aside: parsing text is so satisfying).

And that’s … it. It all feels rather anticlimactic, like there should be official forms to be filed with The Internet and weeks of waiting, but nope. If you’ve got a server, you too can open up Port 17 and shove some quotes inside.

At the risk of having my Internet license revoked, you should know my QOTD server isn’t entirely kosher:

Oh! And before I forget. I made this for you, internet friends:

RFC 867, the Daytime Protocol, will tell you the day and time, for in case you’re not seeing it on your laptop or your phone, or your watch, or your tablet, or the clock, or the calendar, or you can’t ask the person sitting nearby you. Super handy.

This one’s fun because somebody was doing some copy/pasting from the QOTD protocol:

That last sentence look suspicious to you?

Here is the entirety of my code:

Should you need it, you can find out the date and time with this magical incantation:

Our last contestant, the shortest of three already-short protocols, comes to us via RFC 862, the Echo Protocol. Excerpt:

Ah! Something a little different this time.

As before, here is the entirety of my code:

For all its vacuousness, this one forced me to think ever-so-slightly more about what I needed the code to do. First, I needed to capture input from the user on the other end (msg = client.gets). Second, note that the protocol stipulates that the client closes the connection, not the server.

Now you can echo to your heart’s content via the command line:

I have a couple responses to this question-shaped declaration:

Visiting these abandoned ports and implementing these three adorable protocols demystified a lot of the stuff about servers that confused me most, stuff like, “soooo a port does what exactly?” “Where do I get a server?” (Write it yourself!) “What do I do with it when I get there?” (Maybe there’s an RFC that will tell you!) “How does a server serve things?” (It’s in the code you wrote, dummy.) “How does a client talk to a server and how does the server hear it?” (Also in the code! It turns out COMPUTERS DO WHAT YOU TELL THEM TO DO.)

Having done this, it’s now time to move on to meatier things. In my previous post I mentioned I was reading RFC 2616, and welp, I’m not just doing it because I’m bored on the subway. This week I started writing my own HTTP server. It’s not much yet (turns out a 175-page protocol is more complicated than a half-page protocol), but if the client’s message starts with GET, the server responds with 200 OK and a little “hi this is ann” message body. Stay tuned!