Our story starts here: I built an as-yet-unnamed twilio app, basically like Magic but for Google search results. 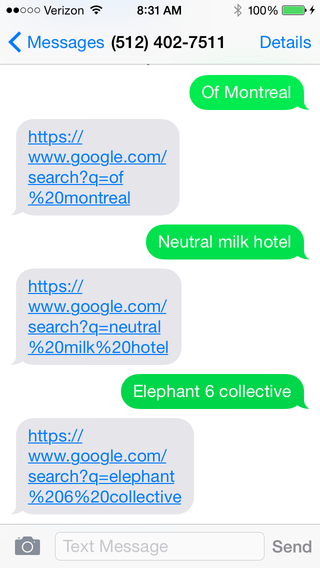 Go ahead and text it yourself! Send it your search terms and it will return a link to the Google search results. Easy!

To do this, I learned some stuff about HTTP, which was my favorite thing about the project. Then I read some more stuff about it and listened to a practice talk all about HTTP from an RC alum. That night on my way home:

We were going across the Manhattan bridge when I had my epiphany, and if you’ve ever been in the New York City subway you’ll know that your phone does this annoying thing where it takes half a bridge to realize it’s no longer underground and it definitely has service again, please connect to the network again pleasssseeeeeeee quickly before we go back undergrounnnnnnddddddd.

I needed to text Richo before I lost service again. I mean, I’m sure a lot of my friends could have answered this question, but there was never a moment when I wasn’t going to text Richo about this: 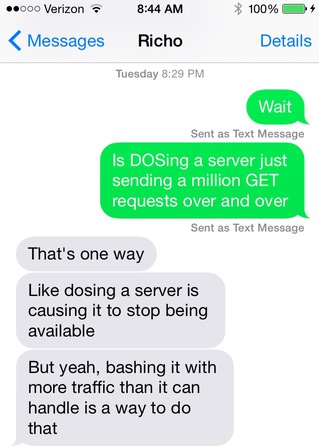 I want to write an aside to tell you guys about Richo, but this post isn’t about him, so here’s the short version: 🐤🍻🌏💻🔨. Richo is one of my favou?rite people.

I got off the train and basically ran home to DOS the only server I’ve got in the most basic way I could think:

while true; do curl http://tranquil-thunderstorm-666.herokuapp.com/?Body=butts; done

A naive attempt to be sure, and I knew that, but that didn’t mean I wasn’t going to do it anyway just to see what would happen. My program needs a parameter request in Body in order to not return an error; “butts” is my go-to filler word always because butts are hilarious.

It didn’t work. After 30 minutes the server was still responding with 200 OK, and I broke the loop.

I wondered how many times it had hit the server in that time. Instead of finding out, I went to bed.

I woke up in the morning to a stern letter from Heroku.

So the thing is, Monday I got the idea in my head that I needed to learn databases. And it’s true, I think that’s a valuable thing to know about. I mean, for this particular app it’s not entirely clear what for, but I wanted to know what a database was and how they’re implemented, so I did just that.

Or really I didn’t, so much as my new RC friend Steven patiently worked through the setup with me, explaining with each error why we were now heading in this direction. This tweet happened:

The database takes the query parameters from each GET request sent to the server and logs them. I can see the zip codes requests are coming from, or count how many requests have come from a given phone number. And of course, the database logs the body of every incoming request.

You see where this is going?

Heroku has some magical incantations that produce a free, limited-use postgres database. It has limits. Limits you could easily run up against if you hit your server repeatedly on a while loop for 30 minutes. 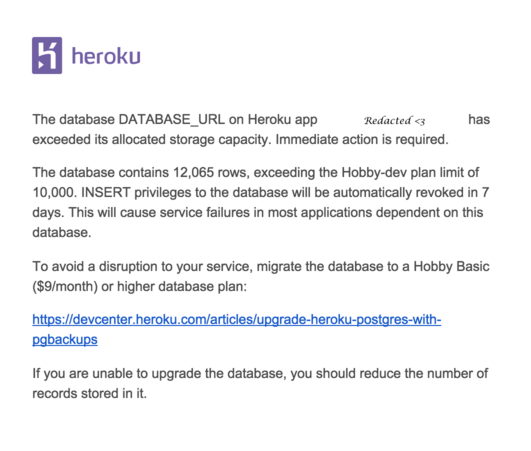 Anyway, I didn’t actually make any trouble other than to cause an automatically-generated eye-roll from Heroku. But that is the story of how I figured out for my own self what a DOS attack is and subsequently filled a small part of the cloud with butts.